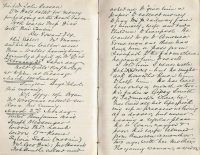 Job Smith called and asked me to “give him a paper” to collect money to pay railway fare of himself, wife and two children to Liverpool. He wanted to go to America. Some man out there has sent him a pass from Liverpool to the farm where he wants him to work.

I told him I never wrote petitions – but he might ask those who know him to help him. He has lived here only a month or two. His father is Gipsy Smith of Tadmarton where he has lived all his life, picking up a precarious living as a drover, but never having a regular place. He is lean, ragged and poor. His wife returned from America a month or two ago, with her mother. The young woman, a widow with one child, was 18. The mother, a widow, with 4 or 5 children from 4 to 13 years of age is about 38 or 40. The young woman’s family was increased by one on the road. The two women lost their husbands by fever within a fortnight of each other. The elder woman emigrated to America some few years ago.

On the death of the men the neighbours paid their fare back to England : Banbury. Here they soon found their way to the workhouse. Mr Ommanney brought the matter before the Board of Guardians and got permission to apply to the Local Government Board for permission to send them back to America. But the G.L.B. declined as the United States would probably send them back again.

I called to see the young woman this afternoon. She would like to go back.

I learn that the man Job Smith is in trouble. Perry, who lives at the Colony, and has been working as a Navvy on the Railway at Hook Norton employed him to drive a horse, a recent purchase, from Chipping Norton to Sibford. It was a very old horse and in a very feeble state, so that it had to be dragged up on to its feet before it could make a start.

“O you must get someone to help you get him up.”

“But praps he’ll fall in a lonely bit of th’ road where I can’t get no one to help me.”

“Well drag him into t’ ditch and cut his throat.”

And this is just what happened and what “Joby” did. And then Perry refused to pay “Jobey” – he “hadn’t drove the beast home he hadn’t and he shouldn’t pay no half crown,” he said.

So next time Jobey went to market – ’twas a Thursday he overtook Perry, and asked him again “How about that half crown as you owes me?” But Perry gave only surly answers – whereupon Jobey said he would have th’arf crown out of his hide and began to lay about him with his stick. Then Perry summoned before the magistrate for an assault. “Jobey” is found guilty and sentenced to pay a fine of 10/- and costs, amounting altogether to about 30/- but is allowed a fortnight to pay it in. So he comes to me to “write a paper for him” to raise the money to pay his fare to Liverpool. I told him if he got the rest of the money I would give him 5/- towards it, not knowing at the time of his quarrel with Perry.

When I called on Mrs Jobey Smith in the wretched cottage where old Sally Green the Lunatic used to live, I found her with her two children and in anticipation of a third, with two broken chairs and one very rickety table for furniture. She looked a strong and rather tidy young woman in spite of her surroundings and told me her story, saying she would be glad to get back to America, for that her husband could not get much work here. The gentleman who had paid their passage had also promised to send them the money to get down to Liverpool, which they expected in about a fortnight’s time. But I learnt afterwards that when the money did come “Jobey” had other things to do with it than give it to the Railway people – and he was still in Sibford 3 months afterward.

Joseph Manning who has been for some years Secretary of the Sibford Benefit Club, having removed to Little Bourton, has resigned his office, and is to be succeeded by Lewis Poulton.