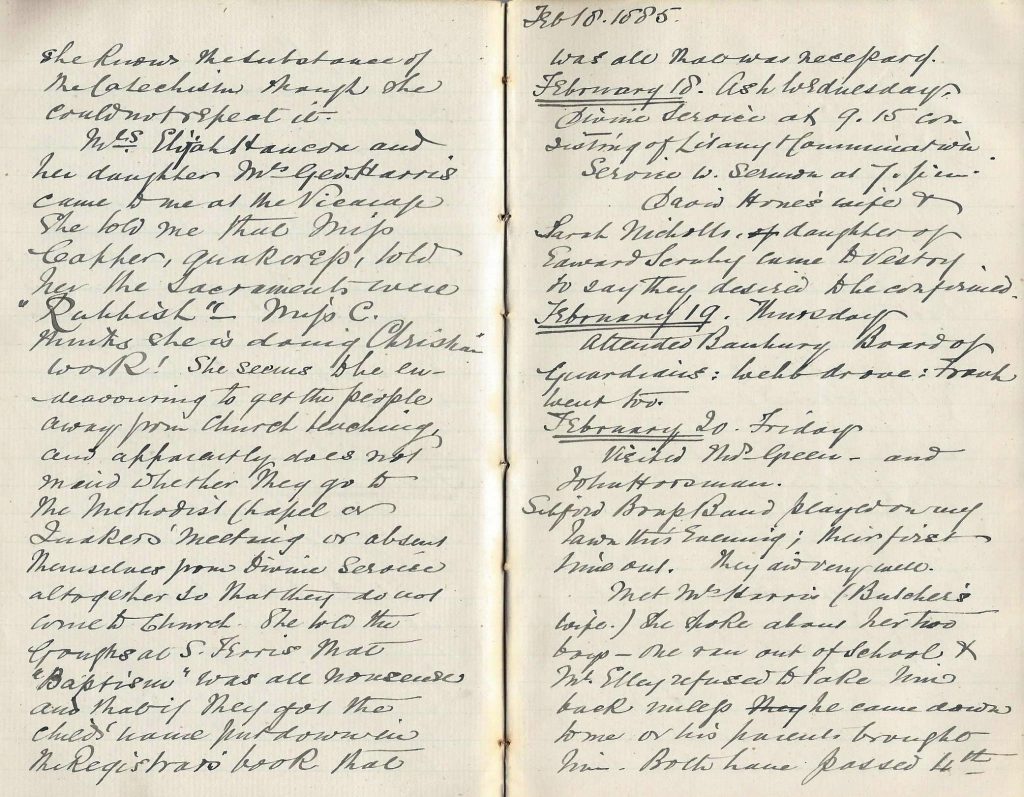 Sibford Brass Band played on my lawn this evening ; their first time out. They did very well.

Met Mrs Harris (Butcher’s wife). She spoke about her two boys – one ran out of school and Mr Elley refused to take him back unless he came down to me or his parents brought him. Both have passed the 4th Standard. For several years I have had serious complaints about their behaviour in the Village – especially their bad language and ill treatment of young children. Mrs Harris said she was sorry the boys had left so strangely and seemed to take their parts. She could not let the other come when the one was not allowed to return. The boy wanted to go out and Mr Elley would not let him. She had told him to come out of school if Mr Elley would not give him permission to leave the room etc. I asked whether she or her husband had written to or told Mr Elley personally that the boy was weak. No neither of them had had any communication with Mr Elley about the matter at all.

I pointed out to her that she had done a very wrong thing in telling the boy to set the laws of the school at defiance and had neglected her duty in not writing to Mr Elley or speaking to him personally. She said the other boys set on her two. I told her that was absurd. They were the strongest and oldest boys in the School. I told her we were not compelled to have them now they had passed the 4th Standard, but that if they wished to send them they might do so on the promise that such conduct should not be repeated and an apology to Mr Elley for the past.

Cutting from the Banbury Advertiser, 26 February 1885

THE SIBFORD BRASS BAND.—This society, which was established five months ago under the presidency of the Rev. Edward T. Stevens, Vicar of the Parish, is, we are glad to learn, making good progress under its painstaking instructor, Mr. J. Griffin, of Shutford. The members gave their first public performance, on Friday evening last, on the Vicarage lawn, when they played several sacred pieces extremely well, with great steadiness and in wonderfully good tune, the best being “Sun of my Soul” and the “Old Hundredth” from ” Hymns Ancient and Modern,” a selection from the Rev. Baring-Gould’s “Church Songs,” and those old favourites, “Home Sweet Home” and “The Blue Bells of Scotland.” We cannot but congratulate the young men on their progress, and on having made such good use of the instructions of their bandmaster, who is one of the quickest and most painstaking we have ever known. Everyone is aware that there are certain “Rocks ahead” on which village brass bands too often split, but it is earnestly hoped that the Sibford Band, which has made so good a beginning, will not run on any one of them. And there is every reason to believe that it will steer clear of this fate, if the members continue to adhere to the rules drawn up for them by their president, and which each member undertakes to obey, “in the spirit as well as the letter.” The members, all of which are labouring men, have shown their earnestness and practised much self-denial by subscribing half-a-crown a week each since last harvest, to their instruments’ fund, with an additional sixpence per week each, since October, for instruction and other expenses. They have paid about £50 for their instruments, supplied by Messrs. Besson & Co., of Euston Road, London,—towards which they have received some £12 in contributions from kind friends in the neighbourhood and even in London. The good order of the members, and the evident interest they take in their music, have won for them the good wishes and respect of all the inhabitants of the sister villages of “The Sibbards,” and we have every reason to believe that this feeling will increase as greater proficiency is attained. The permanence of the band is, as far as possible secured by the rule that the instruments are the property of the society, of which the Vicar is, ex-officio, sole trustee. We may perhaps be allowed to add that that the band still owes about £12 on its instruments’ account, which is being paid off at the rate of about a pound a week, and that such a society appears to be a good means of giving the best of the young labouring men a greater interest in village life than that which is commonly found among them.