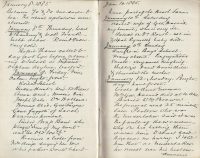 Mrs George Harris died at 4 am.

Buried William Brown. The funeral was 25 minutes late. Poulton who was the undertaker said it was the fault of the women – who on his telling them it was time to start said there was no hurry. I told him that as undertaker he must use his best endeavours to secure punctuality by telling persons in future that they must not expect me to wait at the Church after the time appointed as it was very cold up there – and I had other duties to attend to.

“Some oats be coom, when they be done, th’master ‘ll want to know when they com’d in. What day be’t Charlut?”