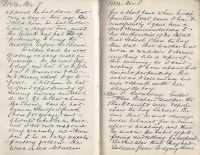 Called to see Richard Walker, the Blacksmith’s wife and spoke about the boy Jarvis. She said that he was always better behaved for a time after a beating, and that he was in the habit of pilfering and telling falsehoods. She said also that they had Soldier Green lodging there, that he had broken his “pledge” and spent every penny he could lay his hands on in beer, and that her husband was led away by him. I recommended her to get rid of “Soldier” Green if he would not mend his ways, for that a man of that kind was not only a great nuisance to her but would also corrupt their apprentice.