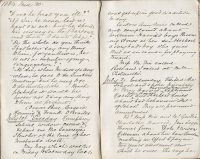 Visited the school and spoke privately to Percy Harris, Thomas Harris, Septimus Harris, John Harris and Herbert Lines about bad behaviour out of school. They all promised amendment.

Visited Miss Dix and Mr George Dix, Charlotte Harris, Jane Legge, Thomas Green. Spoke to Widow Hillman about her son Austin making no effort to pay me two years allotment rent which he owes. She says he got so much behind hand when he was so given to the drink that now though he is better in that respect, all his creditors seem to want their money at once – and he is tempted to drink again by a master at Hook Norton for whom he works refusing to give him any allowance of money instead of beer.

Visited the Loggin allotments some of which are very indifferently cultivated.

Mrs Enock called during my absence from home this evening to ask my advice as to what she should do, for in premises adjoining hers the carcase of a dead cow had been left by a man named Lock who had taken there of Mr Pettipher of Rollright but had not come to live there. The air was so dreadfully polluted by the stench that she feared an outbreak of fever – so that she had been compelled to send away some children who were staying with her. She got my servant Webb to go down and bury a portion of the remains he found lying on the ground, but there was much more behind some faggots. I told him that the occupier of the property might find great fault with him, and make it very unpleasant. Mrs Enock should employ someone to do it, or, in the absence of an Inspector of Nuisances (the Rural Sanitary Authority not having yet appointed one in succession to Hector Morrison, deceased) she should apply to the police.

I sent word to her however that I would see what could be done in Banbury tomorrow.

The cuttings pasted in the diary pages for this date are from the Banbury Guardian of 3rd July and contain a report on the Board of Guardians meeting of 26th June, which is where we have included them.