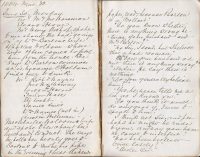 Mrs. Henry Bishop spoke to me about the bad “goings on” of William Barton’s wife and Charles Holtom – whose wife often comes to fetch him from the house. She says W. Barton connives at it because Charles Holtom finds beer to drink.

Met Charles Holtom’s wife and spoke to her about her husband’s conduct. She says he tells her he only goes to Barton’s to smoke his pipe in the evening and hear the newspaper read, because Barton is a “scollard”.

“Do you know whether there is anything wrong between your husband and Mrs Barton?”

“Does your husband admit there is anything wrong?”

“Do you generally believe him?”

“Do you think it would do any good if I were to speak to him?”

“I think not Sir, and perhaps he might be rude to you, and say you have no cause to interfere.”

“Has he been better or worse lately?”

“Does he treat you ill?”

“No Sir, he never laid a hand on me, but he spends his money on the Bartons, and that I don’t like.”

“On the whole do you think I had better say anything to him; for you know, he is not a member of my congregation?”

“No Sir, when he does go anywhere, he goes to the Quakers’ Meeting; but he used to go to the Methodists. I think perhaps it would be better not to say anything to him at present.”