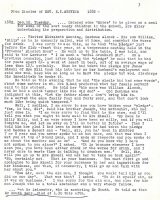 Ordered some “Brose” to be given as a meal for some of the most needy children in the School, Mrs. Elley undertaking its preparation and distribution.

…. Visited Elizabeth Manning, Decimus Alcock – his son William, “Billy” as he is commonly called, was at home, and somewhat the worse for drink. I was sorry to see this, as he took “the pledge” just before the Club feast this year, at a temperance meeting held in the “Friends’ Mission Room”. He went up to the table, I was told, and said to the Lecturer “I be such a ‘orful drunkard Sir”. On a previous occasion, just after taking “the pledge” he said that he had for years spent 8/- a week at least in beer, out of an average wage of less than 12/- probably. When he had taken the pledge Mrs. James Rimell of Rye Hill took him into her or her husband’s employment and said she would keep him so long as he kept the pledge but would discharge him immediately he broke it.

He told me this evening that he and “the missis had said some words” about some matter in which Mrs. R had preferred what her female servant said to his statement. He told her “his name was William Alcock, and he had a quick temper like his old dad”.  Old Decimus was indignant at this, “let thy father alone – don’t bring him in. He a sarved the same family four and forty year, and that don’t look much like being quick tempered.”

“Well,” I replied, “I am sorry to see you have broken your ‘pledge’” – “Yes, he has, Sir”, said his brother Joseph, the Methodist, who had just come in. “I am very sorry to find that is the case, and I’ll tell you what you ought to have said to Mrs. Rimell. “My name is Silly Billy, and I am very sorry I have been so silly, and if you will forgive me, and let me stay on I’ll do better in future” – Then I told him how glad I had been to know that he had taken the pledge and become a decent man – “Well, Sir, you ha’ been in Sibford 7 or 8 year and you never spoke to me but once, and that was when I met you at top o’ Pound Lane, and I made my respects and you spoke to me about the weather and so on” – “And do you know why I have not spoken to you since?”  I asked. “It is because whenever I have seen you, you have been either drunk or the worse for drink, and I never care to waste time in talking to drunken men.” Well, Sir, will you go up to Mrs. Rimell and ask her to take me back again?” “No, certainly not. That is your business. You must first go and apologise to Mrs. Rimell for your rudeness to her and ingratitude for her kindness, and then, if necessary, I will go up and talk with her about you.”

“Yes Sir, said the old man, I thought you would tell him as you did me one day.” What was that? I asked. “To do it myself sir, as it was my business.” I was sorry for the old man, and also for his son Joseph who is a total abstainer and a very steady fellow.

… Met Mr. Leicester, who is assisting Dr. Routh. He told me that Mr. Routh Senr. died at 1.30 this afternoon.