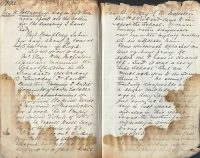 H. M. Inspector Rev. H. A. Pickard came in to inspect the School. He made himself rather disagreeable over one or two trifling matters which did not please him.

Some whitewash splashed on seat of boys’ privy. He asked me to have it cleaned off – said it was a very nice school “But we must ask you to do something”. He seemed particularly disagreeable over a slight mistake in the age of Amy Spicer which was put down as 6 last birthday in last year’s schedule and also in this year’s. It was the mother’s fault originally in giving the wrong age when the child was first entered. The fuss he made about it was surprising – asking me in a peremptory sort of manner which I promptly resented, though with good temper why I had not observed it. I told him I was not supposed to go over every figure set down by the School Master, but only to take a sufficient number to verify them – and that that happened to be one that I had not taken. Mr Elley knew of the mistake and directed Eley’s attention to it. He had made a small cross in pencil against it to catch my eye, which it had failed to do being so small, and he had had no opportunity of seeing me about it.

But what wretched trifling to pay a man like Pickard £1000 a year for such work.

As Pickard came in with me – I had gone out to meet him when he came up to the door in a cab – the children stood up according to the rule of the School when I entered. He said he did not like that and wanted them to sit down, which I told them to do without further remark.

When he left I went out with him and the children stood up as usual. Turning round to them rather angrily as it seemed – or at least sharply – he bade them sit down – he did not want them to rise to him. I told him, but not in the hearing of the children, that it was a rule of the School that they should rise when the School Managers or Trustees entered or left.  (He had no right to consider that they rose to him, as I was present.) “I don’t want them to rise to me,” said he.  “Perhaps they think you a greater man than any of the trustees,” I replied. (So he is by some 6 or 8 stone, I should guess.)  And I said it is a matter we should not yield in because we desire to inculcate good manners in the Children, which the Code also requests both Managers and Teachers to pay attention to.

He protested that he did not wish to set aside any rule of the Trustees, and that he thought the paragraph referred to in the Code (or elsewhere) a very important one. His idea is that the Children are disturbed in their work by so doing, but it is so rarely that anyone except myself goes into the school that it may be counted for naught.

The Children in the Upper Standards have not done so well as they did last year. Their irregularity of attendance tells against them. The whole is 75 per cent.

John Lines’s wife called this evening and paid me £1.5 in advance for Sibford Ferris Allotments 1 and 3. She asked me if I could let her husband have no. 2 also and she would pay me in a fortnight. I said yes, but gave her a month telling her it must be paid by that time.