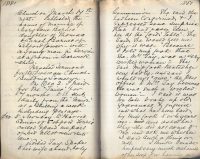 William Harris Senior of Sibford Ferris called and paid me part of his allotment rent due.

Visited Tay. Spoke to his wife about Holy Communion. She said she had been confirmed and I expressed some surprise that I had never seen her at the “Lord’s Table”. She said she would tell me why it was – “Because I told Miss Cook that she, Mrs Tay, was a very wicked woman.” She said Miss Cook treated her very badly, and said I would not “give” the post office to Mrs Tay because she was such a wicked woman”. I said it was too late to rake up old grievances and enquire into what had been said by Miss Cook 5 or 6 years ago – and asked her why she did not come to me and ask me whether I said such a thing or not. I think I made her feel very much ashamed of her self for having or assigning such a reason for neglecting her religious duties and privileges.

Went to Banbury and brought out some ice for Tay. Harry came home. There was an almost total eclipse of the moon this evening for which I was quite unprepared, and which we saw as we were coming from Banbury.