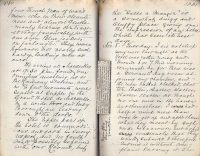 I did not sleep very well last night as the Hotel was rather noisy and towards 6 or 7 this morning very much so, for there was a servants day room adjoining my chamber, and the men talked, chatter, chatter, chatter, clatter, clatter clatter as though no one were in the house but themselves. I had half a mind more than once to get up and ask them what they meant by such rude behaviour, but hoped constantly that they would subside and therefore endured it without complaint knowing it to be the only night I intended to stay here. It is not the first time I have been disturbed by noisy servants in hotels and I am therefore seriously contemplating the sending a circular letter to the proprietors and managers of hotels on my next foreign route calling their attention to this matter. Travellers themselves are often very inconsiderate of the comfort of others, for it is not pleasant, when one has just dropped off to sleep to be rudely awakened by the occupier of a room in the same corridor stamping along with heavy boots, opening his door, shutting it with a bang, stamping about his room, then opening his door as though he intended everyone to know what he is doing hurling his boots down outside with the reverberating noise which a couple of sacks of coals might be supposed to make, and then banging his door as though he would have every one know that his snobship was at last going to “turn in”. I wish very much there was a law enabling his weary insulted and irate fellow travellers to “turn him out”. This morning a very loud and long sounding electric bell added to the “horrors” of the situation.

It was a fine, warm morning, and after breakfast we went out for a walk.

Marseilles is of course a very busy commercial city.

We saw a wagon laden with crates full of chickens and ducks, which were intended to be alive. But they were packed very close and had probably come a long journey without food – so that great numbers of them were trampled or starved to death. I have rarely seen a more pitiful sight or one that roused my indignation more. For various reasons however, as foreigners, we could not interfere farther than by giving the poor creatures who survived some grapes we had just bought and which they devoured eagerly.

We reached the Railway Station, and finding an official interpreter on the platform – the first we had met with – made enquiries of him concerning the departure of the trains, and found that the best time for us to leave would be at 2.10 pm.

We had time to make a little acquaintance with the town, seeing the docks and the shipping and to a slight extent the manners and customs of the people.

At the door of a rather mean looking shop, which was not open for business, a table was placed and on it a printed paper setting forth that Monsieur A, Monsieur B, Madame C, Mademoiselle D, etc etc the grandfather, father etc etc of Madame E begged to announce the grievous loss they had sustained by the death of their lamented relative, and that the funeral would take place at such and such an hour on such and such a day. A pen and ink were placed on the table and a sheet of paper or book on which numerous persons, coming up, wrote their names.

At 2:10 pm we left Marseilles having a carriage to ourselves during the whole journey to Paris. We did not stop at all till we arrived at Arles 86 metres from Marseilles. During this portion of the journey we passed mile after mile of rocks looking like cyclopean city walls, and we saw some lagoons, artificial lakes of sea water on the shore – made very shallow so that the sun may evaporate the water and leave the salt at the bottom.

At 5 pm when it was beginning to get dark, we arrived at Avignon, a city interesting as having been the residence of the popes for some years in the 14th century.

We obtained some refreshment at one of the stations en-route, taking it into the carriage with us, then lighted our candles and amused ourselves with reading. At 10.55 pm we arrived at Lyons where it was very foggy owing probably to the presence of the Rivers Rhone and Saone which her unite. So far as we could see it, Lyons appeared an ugly and uninteresting manufacturing town. The Railway servants here renewed our foot warmers which had been placed in the carriage when we left Marseilles. They did it without being asked and did not stop for “tips” – a great improvement on the English system.

At 11.5 we left Lyons and arrived at Dijon at 3.30 am where were able to get a little refreshment, at a frightfully dear rate, which was also the case at Tonnerre which we left at 6.30; for here they charged a franc for a mere cup of coffee.

RICHARD ROUTH takes this opportunity of returning his very since thanks to the Inhabitants of this Village and others for the great exertion they used in suppressing the Fire which broke out in his Farm yard on the evening of the 5th of November. A large straw rick was destroyed, but well-directed effort, it is believed, was the means of saving some thatched buildings which were very near.

The damage done by the fire is covered by insurance.