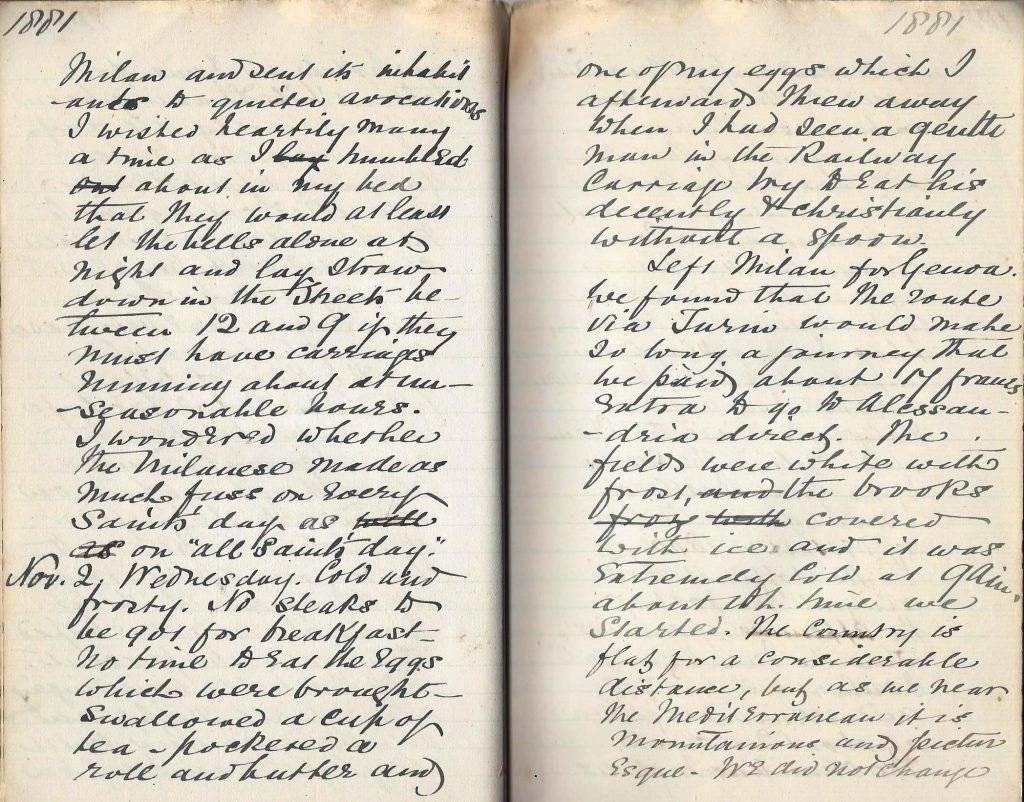 Cold and frosty. No steaks to be got for breakfast – no time to eat the eggs which were brought – swallowed a cup of tea – pocketed a roll and butter and one of my eggs which I afterwards threw away when I had seen a gentleman in the Railway Carriage try to eat his decently and christianly without a spoon.

Left Milan for Genoa. We found that the route via Turin would make so long a journey that we paid about 17 francs extra to go to Alessandria directly. The fields were white with frost, the brooks covered with ice and it was extremely cold at 9 am, about which time we started. The country is flat for a considerable distance, but as we near the Mediterranean it is mountainous and picturesque. We did not change at Alessandria (or Alexandria) called “Of the straw,” because the houses were originally thatched with straw from motives of economy. It was built in honour of the Pope Alexander iii (pope 1159 to 1181). It is a border town and is strongly fortified with outworks having played an important part in the various wars that have raged in Italy. Near it is the Plain of S. Julian the scene of the Great Battle of Marengo and the death of Dessaix in 1800.

We stopped at Novi a city at the foot of the Apennines where the French general Joubert fell in 1799, and arrived at Genoa at about 2 o’clock. The omnibus took us to the Hotel “Croix de Malta”, a very good establishment in a narrow street which is very noisy when the omnibus rumbles down it, but at other times is reasonably quiet.

Having satisfied our hunger we sallied forth to see the town and walked along the shore from end to end, availing ourselves of an omnibus for the return journey. The port is an inferior one but apparently improving. A very expensive and excellent esplanade has recently been constructed on the western side of the town. I should think Genoa looks well from the “gulf” as the mountains, dotted about with villas, monasteries, churches etc rise at its back, giving it somewhat the appearance of a vast amphitheatre. From the roadway beyond the lighthouse at the west end of the town, where one of the city gates is, there is a beautiful view of coast, lined with villages, having the maritime Alps in the distance at the rear. Some of the streets are good and of a reasonable width with handsome marble palaces and good shops here and there. But the majority are extremely narrow with very lofty houses on each side, whose roofs sometimes overlap at top so as to shut out the sky. Many are also very steep and were probably constructed before wheeled carriages were much used for ordinary purposes. The tramways are good and were extremely well patronised this evening “All Saints’ day” when the cemetery was illuminated by the friends of the deceased buried there.

The burial of the dead is accomplished by a voluntary society who follow the corpse to the grave dressed in a plain garment falling to the heels and wearing a sort of hood which comes over the face with apertures for the eyes nose and mouth and looks like a hideous mask.

The east end appears to be the oldest and worst part of the town – as usual. here we saw some barrackes and a young soldier brought in who was intoxicated and had been fighting. Immediately he had been taken inside a small crowd of street urchins who had scented out the “fun” crowded round the gate to have a look into the barrack yard expecting perhaps to see the fellow shot at once, but the sentry, closing the gate in their faces they were compelled to climb up to one of the windows to the right, hanging on the bars in most uncomfortable attitudes, and probably seeing nothing, just as English street boys do when a tipsy fellow is taken to a police station or one who has been run over is taken into the nearest chemist’s shop. There is a great deal of human nature all the world over.

Exploring some of the narrowest and steepest streets, with high old houses on either side in this quarter of the town and making our way towards the centre we came upon a large open space, the Piazza Nuova. On the right were some street stalls covered with what appeared at first sight to be maccaroni twisted up into all sorts of shapes, but which turned out to be wax tapers, used in great numbers on All Souls’ day. Entering the Church S. Ambrogio close by we saw a number of children from two to fourteen years of age seated before various tombs, lying in all postures on the floor of the chapels, or seated about in different directions, but all having lighted tapers, and enjoying the fun amazingly. There appeared to be some danger of setting themselves if there was no danger of setting the marble steps, tombs, and altars alight, but they were bespattered with grease in every direction.

Walking on we came to the theatre of San Carlo a modern and handsome structure, and turning to the left reached the Church of the Annunziata, th efinest in Genoa, originally built in 1228. It is adorned with many paintings and frescoes and a handsome facade of white marble. From a marble bench outside which is at a considerable height above the roadway we watched the trams and omnibuses busy taking their loads of Genoese out to the Cemetery. On the left of the piazza at the end of the tramway was a turn-table on which the carriages even when full of passengers were very easily turned. These tram-cars are deservedly popular and were filled with persons in less than a minute of their arrival at the end of their route. Nearly all of them were open at the sides, but provided with curtains.

In Genoa as in Rome and Naples there are priests and monks everywhere and whenever you see two meet or walking together there the inevitable snuff box receives due attention.

After dinner we inspected a very extensive collection of silver filigree work at the hotel – the proprietor thereof being a manufacturer. He has a large and beautiful stock. I selected a brooch for Mrs S and one for Rosa, the manager readily accepting my cheque on the London County Bank at Oxford in payment, which made me as proud of the name of “Englishman” as any circumstance that in my experience has ever happened to me. I was not dressed in clerical attire, was perfectly unknown in Genoa and was separated by a portion of Italy, the whole length of France and almost half the length of England from my home. And yet, a common banker’s cheque with my name thereon was received in payment for my goods which I took away in my pocket!

We walked out for a few minutes at about ten o’clock and found the town very quiet.