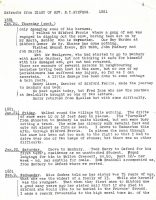 Miss Cookes told me her sister was 75 years of age, that she was the eldest of a family of 13. While she herself was the youngest. That when they first came to Sibford now a good many years ago her sister said that if she died in Sibford she would like to be buried in the Friends’ Ground. I made a remark favourable to the high moral tone etc of the Quakers – adding of course – that I thought them wrong on religious questions – and that I was sorry they took the wrong views they did. She did not make any reply to my remark respecting them, but said she thought the Methodists that went to the Chapel across the road were “a bad lot of people”. I said I thought there were some conscientious, good living people among them. “Not many”  she replied, “But Joseph Alcock seems a steady religious sort of man”.  “Yes”, I said, “I think so too. At least I have never seen or heard anything to the contrary. And Frank Wilks who was in your shop just now, I should think him a religious kind of man in his way.”  “Not much of that Sir”, replied she – For all his professions he is not  well-bottomed”.  “How do mean?” I enquired. “Well Sir – he was in one day and in talking he said something he ought not – and what he knew was bad language and a lie as well, and I said to him you ought not to say so – You want bottoming -” – “Well” he acknowledged, “I know I ought not to have said it.” I did not carry on the conversation but inferred that she meant, he was not really sincere in his religious professions.