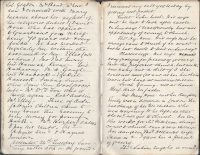 Snow being rather deep on the ground I renewed my cold yesterday by getting wet-footed.

Visited John West. His wife said he had to look after cattle on Sundays and consequently had not opportunity of coming to church.

Thomas Henry Hone. His wife said he always came to church if he could but he had cattle to tend on Sundays.

Charles Legge. His wife ?seemed? very grateful for present of grocery. Said she preferred church but with one baby and a child of 3 she could not well get out as her husband was a bad hand at minding children.

Sarah Young – not at home. Benjamin Aris her father.

Widow Mary Hone – said her daughter Emily was in situation in London. She had charge of her children who were too young to be left, so that she could not get to church. Her son who works for Mr Hitchcox, always comes to church once a day she says. Her daughter, Mr Hollands’ wife came in and gave her a parcel of grocery.

Thomas Sabin says he is over 80 and afraid to get out just now lest he should fall down.

Charles Coleman, No one at home. Widow Austin

Charles Hands, whose allotment rent is still unpaid – not at home.

Gave Charles Barnes and his mother 2s 6d of grocery each out of Mr Hopkins’s donation.