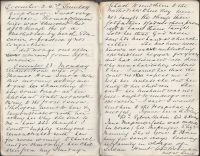 Eleanor Hone wife of Thomas Hone sent a note this morning asking me to give her something to buy some bread as her husband could not work owing to the frost and snow. I therefore went to her and remonstrated with her asking her why she sent to me – how she thought I could supply everyone – remonstrated with her for never coming to church and for removing her children from my Sunday School to send them to the Methodists where they were not taught the things their godfathers and godmothers promised to have them taught. Told her that God never saw her husband at church either.

She has been well known as an unblushing and persistent beggar for years, and has alienated all those who were charitably disposed to her. I warned her that she could not expect me to help her unless she did her duty to her children. She said her husband was not well – ought to undergo an “operation”. I said I would send him to the Hospital if needful. I gave her a shilling.

Visited Sylvia Sabin. Widow W. Keene. Jane Messenger (who was outside her house). George Messenger. Elizabeth Manning who is gone to Banbury for some days leaving her family in charge of Susan Hunt. Widow Robinson not at home. Solomon Geydon. Mrs Bond, where I saw and conversed with Mary Weaver about her neglect of her religious duties. David Hone who has applied to Guardians for relief being 70 years old and very feeble. He has worked regularly till within the past week or Nov. Ellis (not at home). John Padbury. Widow Hannah Keene. Widow Hathaway. ?Jonathan? Gough. Widow Hancock. Ezekiel Hancock. Joshua Lines where I saw Sam Woolgrove’s wife. Mr William Fox who is well again. Robert Austin. Mr Elley.

Three of Austin Gardner’s children came to my house this evening to bring money for penny bank. Mr Herbert called to pay his rents. Visited Haynes Senior and Haynes Junior.