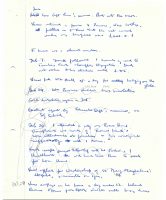 I attended a meeting of the Brass Band. Complaint was made of Thomas Lamb’s non attendance at practice and his consequent inefficiency with the drum. The members also wanted their balance sheet for last year drawn up. It was decided that John West, as Secretary should ask him to bring his books to me to make up the balance sheet and come to the meeting.

Leslie Baily notes under this date:

Frank accepted junior tutorship with Mr Fisher, Chislehurst. He would have time there to read for London University.

Vicar employs in his house a boy under 12. Inland Revenue officer from Hook Norton calls to say Vicar must pay duty for employing a boy under 16. Vicar disputes it and proposes to write to Somerset House. Somerset House replied that he must pay and should take out a licence at once “which I did without delay, though I think it a great hardship ?? it is an illegal demand.”