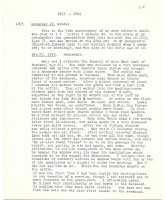 Bell and I attended the funeral of Miss Emma Lamb of Burdrop, age 69. The body was enclosed in a very handsome polished oak coffin with massive brass plates and brought in a handsome hearse with glass sides. The coffin was committed to the ground in silence. Then Miss Eliza Lamb, sister of the deceased, repeated some twenty or thirty lines of sacred poetry. After a silent interval of about 5 minutes all walked round the grave and took a last look at the coffin. Then all walked into the Meeting-house. Richard Lamb took the centre of the elders’ seat, supported on the right by Mr Abbatt and on the left by two ladies, Mrs John Wells and another. On seats on the floor were Joshua Lamb, John Wells, William Lamb and others. Lewis Poulton was there, as undertaker. Miss S.Dix, Mrs Turner and a good many other church people were there. In fact there were rather more Church people I think than Quakers. We waited perhaps 20 minutes before any one spoke. The stillness was impressive. Then John Wells said a few words. After about 10 minutes, Mrs Wells spoke in a very pleasant voice and quiet manner. After ten or fifteen minutes Mrs Wells offered a prayer. She knelt (I believe) facing the people who all stood. After another interval Richard Lamb took off his hat, which he had worn all the time, though almost all the other men present had doffed theirs, and said “Be ye also ready “feels” to me to he the message to the world”, and putting on his hat again, sat down. Shortly afterwards, he and his coadjutors on the dais stood up, he opened the window over his head for ventilation which appeared to he the signal for departure. I believe that on occasions of ordinary service he shakes hands with one or two of his coadjutors as a signal to close the meeting. But I did not see him do so. There-was one handsome wreath on the coffin.

It was the first time I had been inside the Meeting-house on any occasion of a service, though I had attended one or more funerals in the grave-yard. I afterwards asked Mr R. Lamb that relationship he had borne to the deceased. He replied that they were first cousins. Mrs Lamb who was with him said she was also first cousin to the deceased.

R. Lamb said he took it as extremely kind of me to attend the funeral. I thanked him in reply, and said I had always had a great respect for the late Miss Lamb. Frank, who was present, and sat facing the dais says that the only lady who sat there was Mrs Wells, and that R. Lamb shook hands with her and with Mr Abbatt as a signal that the service was closed. Mr Oddie was not there, nor his wife.

Sibford Gower
An
Entertainment
Will be given in the above Schoolroom, by some of the Scholars,

Part II.
Recitations by several of the School Children.

Part III
A CHRISTMAS CANTATA
The Bundle of Sticks; or The Capture of Santa Claus.

Doors open at 6.30 p.m., to Commence at 7 p.m.
ADMISSION: Front Seats, 6d., Back Seats, Ed.
The Proceeds will go towards Entertaining the Scholars in the Day Schools.

The REV.E.T.STEVENS,M.A., has kindly consented to take the Chair.

The entertainment will be repeated on Wednesday Evening, when the scholars & parents will be admitted Free.