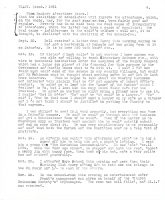 Mr Richard H. Lamb called to ask whether I knew anyone who was able and willing to teach Elementary Science etc, with a view to technical instruction under the auspices of the County Council which has a large sum placed at its disposal for this purpose by the Government and hardly knows what to do with it. I said I did not think much would come of the scheme in our country villages, but would ask Mr Robinson what he thought about working under it and let him know tomorrow. Then he began to talk about the Charity business and indicated very plainly that he did not approve of Robert Oddie’s conduct. He asked me to lend him the “Award of the Parish” which I declined to do, but I lent him the copy which Elley made for the Trustees. He asked me whether he might bring a friend here to see it. I replied “Not Mr. Oddie.”

“No,” said I, “for in that case, I should want a lawyer on my side as a witness and I do not think I should be justified in putting the Charity to that expense.”

I was obliged to meet Mr L. very promptly, but everything was done in a friendly manner. He said he would go through with the business and get a Commissioner down if he could. Then if the matter of the Churchmen only as Trustees went against him he would quietly submit and say no more about it. He was very complimentary to me personally and said that both the Parish and the Charities owed me a deep debt of gratitude.