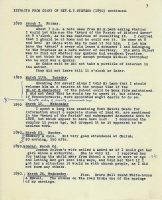 About 7 p.m. a note came from Mr R. Lamb asking whether I would let him see the “Award of the Parish of Sibford Gower” at 8 o’clock, as he was desirous of consulting it. I replied that I should be at home and he could see it. He came at 8 o’clock and brought Mr. Oddie with him to read it for him. I let him have the “Award” and every old lease and document I had belonging to the Trustees as a mere matter of courtesy. His main object was to find out whether any Quakers had ever been Trustees. I do not think he found any except perhaps Michael Pettipher, who said he was a Quaker.

Mr. Oddie said he did not take a particle of interest in the matter.

They did not leave till 11 o’clock or later.