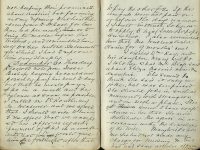 Received note from Jesse Bishop saying he could not possibly pay his rent today but that he would pay £40 in a week and the balance as soon as possible. I called on Dr Routh, my co-Treasurer, and we agreed that I should write to him to the effect that we accepted his offer of £40 in a week and that we could give him a fortnight after that to pay the other £20. If the amounts were not paid on or before the days named I should instruct Solicitor to apply to his (Jesse Bishop’s) sureties. I also reminded him that the Trustees could claim for 9 months’ rent.

I visited William Kay, and his daughter, Mary Wilks. I told her what Mr Bliss said about Eliza Harris’s niece and executrix. She seemed to think he said it only in joke, but was surprised she should joke in such a manner, with strangers and in such a a place. She seems to have confidence in her that she will distribute the assets in accordance with the directions of the will. Mary Wilks told me she had not made any charge for nursing, etc, but had had some articles of furniture whilst the niece, and a nephew living at Tysoe had taken the rest. I pointed out to her that they should all have been sold for best price they would fetch, and the proceeds duly accounted for. She saw that at once and said she asked the niece (Maria Walker?) whether that ought not to be done.