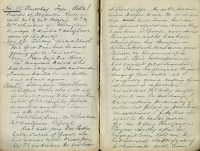 Visited Coles at Sibford Ferris who is ill and in want owing to the drunken habits of his daughter perhaps as much as anything. I sent him 4lbs mutton.

Received note from Rev Parkes Willy, Curate of Epwell, who has received notice to leave from Rev Dr. Wilkinson the new Vicar of Swalcliffe. He asks permission to refer to me. He and his wife have borne but an indifferent reputation since they have been at Epwell, now about three years; and he has been absent from his benefice in Northumberland some seven years I believe, on the ground of ill health. Their intemperance has caused great scandal, but I have no personal knowledge of their habits, as I carefully avoid meeting them whenever it is possible. I replied that Mr Willy might refer to me “For that though I knew nothing personally of either his pulpit or parochial ministrations I felt that it would be the barest justice for me to say that Canon Payne, shortly after he engaged him, told me he had received satisfactory testimonials with him, and had seen correspondence between him and the Archdeacon of Northumberland, in which it was stated that the sole reason of Mr Willy’s absence from his benefice was the state of health of himself and his younger daughter.”

Lovell, formerly a well to do farmer of Chipping Warden, and afterwards of Tadmarton, who married (his servant?) a daughter of John and Eliza Lamb of Sibford Gower called this evening and asked me in a very familiar tone to lend him 10/-. I replied “certainly not” which seemed rather to surprise him. He has been carrying a basket of herrings for sale, and begging about the country for several years, but his misfortunes are entirely the result of extravagance and drunkenness on the part of himself and his wife, and he has no claim whatever on me, as he resides in Banbury and is perfectly able to work for his living, but is too lazy, and too fond of drink.