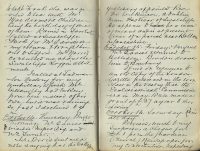 Received, much to my surprise, a cheque for £1. 1 from the Guardian (Church) Newspaper for my contribution respecting the late Canon Payne.

Called on Mr George Dix and Richard Austin, but did not see either. Visited Mary Lively.

Received rents of Sibford Heath Allotments this evening. George Green came in the worse for drink and wanted to quarrel with Henry Harris because he had an allotment before he had been resident in the parish 12 months. I told him there was no rule of that kind and that he must mind his own business. But he would not keep quiet till I threatened to take away his allotment and cross his name out of the book entirely if he could not behave better. He felt the force of that argument and subsided at once. Several men present who had offered to take allotments in the Furze Land now said they wished to withdraw.

Sent first volume of “Prayer Book teaching” to Butler & Tanner for an estimate.