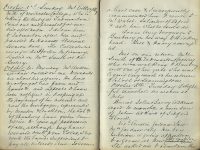 Mr Austin Gardner called on me to consult me about his affairs. He has mortgaged his farm and house etc and appears to have been negligent in keeping up the payment of his interest and now the mortgage, represented by Munton & Stockton, the solicitors of Banbury, have given him notice to give up possession of all, although they have received rents from Coles, who rents the land, sufficient to pay all interest due. It seems a hard case and consequently I recommended him to write to Mr Walsh, solicitor of Oxford, and ask him what he could do.

Drove Amy Ferguson to Banbury on her way to Birkenhead. Bell and Harry accompanied us.

Met on our return Mrs Smith of Tadmarton Rectory who was walking to Banbury with one of her girls who was crying very much on her return to school at Leamington.