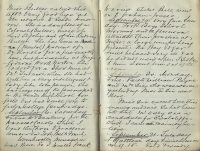 I heard that Elijah Hancox of the “Slat-house” opposite the Vicarage was about to leave Sibford. he is tenant of the “Furze or Fuel Land” at £11. 5 per year, and has not paid his half year’s rent, due last March with grace till June. He has promised me several times to call and pay it, but has not done so. I went down to consult Mr Woolgrove as to what we should do. He was at home, but just going to bed, but agreed that I had better see whether there was anything on the land which could be seized for 9 months’ rent, and then put the matter into Messrs Fortescues’ hand. Called on Routh about the same matter, but he was not at home.