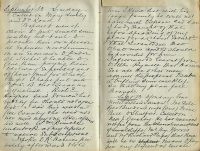 Drove Bell to Shutford. Called on Rev J. Gerahty. he has received notice from the churchwardens of Swalcliffe (Mr Hy Norris and Mr Richard Page) that there will be no means to pay him any stipend as Curate after the end of the Quarter. He is something like 76 years of age but wonderfully cheerful and active for his age. But he has no means, I believe, and I don’t know what will become of him.