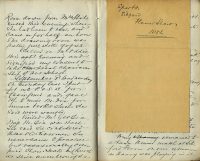 On Monday last I put £1 into P.O.S.B. for choir fund and gave 10/- to Miss M. Dix for music books which she said were wanted.

Visited Mr George Dix. Miss M. Dix was there. She said she considered those old choirmen who never came to practice but occasionally occupied choir seats in church as still members of the choir. I told her I did not and should not include them in any arrangements I might make.

I spoke to Joseph Alcock about his niece Matilda Barnes and his nephew Daniel Alcock.