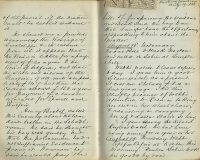 Drove Bell to Hook Norton and called on Sabin at Temple Mill.

Webb’s notice to leave expires today. I gave him a good silver watch as a present. It cost me I believe £3.10 a few years ago. I did this chiefly because of Webb’s attention to Rosa in taking her out in her wheelchair, and assisting in carrying her up and down stairs so long.

I gave Harry the silver keyless watch. He had been using mine for a year or two.

Cutting from Banbury Guardian of 19 August 1886

ROYAL AGRICULTURAL BENEVOLENT INSTITUTION.—The annual sermons on behalf of this much-needed and excellently-managed charity which grants small pensions to decayed farmers and their families, were preached in the church here on Sunday, August 1st, by the Rev. Edwd. T. Stevens, M.A. The collections, supplemented by the offerings placed in the alms box on the following Sunday, amounted to £2 .13s. 6d., and we are glad to know that a by no means insignificant portion of this sum was made up of the contributions of agricultural labourers and their wives. In June last, 36 pensioners were elected out of a total of 443 candidates, so that the large number of 407 had to be sent empty away. Nearly half the candidates were over 70 years of age, one being over 90, 28 over 80, 80 over 75, and 109 between 70 and 75 years of age. This does not, of course, represent the whole of the distress among the farmers of the country, but we think it is sufficient to show that a society which does its best to meet it in a particular and very good way, deserves the increased support of the whole community, which benefits by being able to buy a big loaf for a little money. [The foregoing was received too late for insertion in our last.]