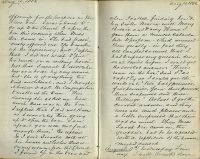 Fine day. I took Frank down to the second day’s sale at Swalcliffe Vicarage. I bid up to £15 for a mail phaeton, convertible into a wagonette, but it was bought by Mr Fortescue senior of Banbury, who got it for £20 and was very much pleased with his bargain, telling me that he had been prepared to go much beyond that figure for it. He than had his own carriage put up for sale, in which he had drive over, and which his son John told me they had used for 33 years. It fetched £6.10 and was bought by Girling, the coachbuilder of Banbury, who, Fortescue said, would set to work on it and probably sell it for £20. It wanted a good deal of “doing up.”

The books fetched wonderfully little money. Most of the handsome, whole bound, classical books, sermons, pacts, etc realising less than 3d per volume. I bought 12 volumes of the Parker Society’s Life of Cranmer etc for 2/6 and some splendid editions of Euripides etc for 3d per volume.

I received a letter this morning from a clergyman at Morecambe Rectyory, Lancaster, asking me for character etc of Rev Mr White who is a candidate for his Curacy. I could not make out his signature but I think it is J. S. Marsden, and I am unable to find Morecambe Rectory in “Crockford.” I therefore replied to him to that effect and added that on hearing again from him I would forward the letter I had written in reply to his.

George Burdon, of Brailes called on me at my request and I engaged him as Groom and Gardener, and to make himself generally useful. I have promised to give him 14/- a week with cottage and garden to start with. If he suits I will raise him to 15/- at the end of 6 months, and to 16/- at the end of 12 months. I told him all I required of him, having made memoranda beforehand of what I wished to say. He is 26 years of age, is married to a young woman belonging to a village between Shipston and Stratford, the name of which I have

He belongs to a Benefit Club and sick club for himself and his family. He is to enter upon his duties on Thursday 19th inst.

On Monday William Lyne and his wife asked me to advertise for them in the Oxford Journal – as coachman, groom and gardener etc – and laundress, which I did. I heard subsequently that they did not get any satisfactory reply, and that owing to their propensity for drink they received no assistance in getting a situation from

It looks as if Stevens’s writing was interrupted at this point; the last sentence was not finished, and the writing continues in a fainter ink and smaller hand, repeating a topic from a couple of pages earlier.

Attended sale of Furniture etc at Swalcliffe Vicarage, belonging to late Canon Payne. Bought a few books for absurdly small sum. Books were evidently at a discount, for although many volumes were handsomely bound and originally cost a good deal, the average price, some half dozen rare works being excepted, was only 2 or 3 pence per volume.