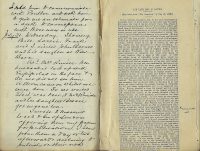 Showery. Bell, Lottie, Frank and I visited John Barnes and his daughter at New Barn.

Visited Mrs. Rimell. Her husband is laid up with Erysipelas in the face and so we did not see him. A storm came on whilst we were there – so we waited till it was over, and Mrs. Rimell and her daughter Bessie got us some tea.

I wrote to Marcus Ward & Co of London offering them my poems for publication. I heard from them a day or two afterwards declining to publish on their own responsibility, but offering, if I would send  up the manuscript to give me an estimate for publishing at my own risk.

The cutting pasted into the diary here is incomplete and it is not clear where it has been taken from. However, the original Guardian article was reprinted in the Banbury Guardian of 29 July 1886, the full text of which is available in The British Newspaper Archive and is copied below.

For many years Edward Payne was in the habit of taking his annual holiday from the middle of June to the end of August, spending most of his time in coasting along the western shores of Ireland and Scotland in his own yacht. He was an excellent sailor. When enjoying this annual and well-merited holiday, he always made arrangements, which never once failed, to be in port on Sundays, that he might attend divine service on shore, and would say that God had been very good to him in always sending such winds has allowed him to carry out his wishes in this respect. He had made arrangements to commence his annual holiday, as usual, during the week after Trinity Sunday, although he had been a great sufferer for two years, and was occasionally entirely unable to perform the services of his church. But on the day on which he had arranged to leave him, he was seized with a severe illness, arising from his old complaint, from which, after some ten days of intense pain, borne with Christian fortitude, he was released by death on the 30th June, 1886, aged seventy-seven.