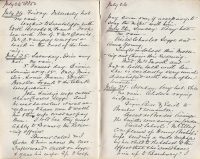 Drove Bell and Edith to Brailes and Winderton. Called at Brailes Vicarage. The Smiths were away in London.

Visited School. Mr Elley complained of Henry Bishop’s wife sending a rude message by her child to the school to the effect that she “would have him up to Banbury.” I told Elley I should have punished the boy for impertinence and written a note to the mother telling her what I had done and giving her to understand that I did not think it possible she should have sent such a message.

Elley said he heard the Doctor say that he would kill anyone who was naming him as the father of the child of Mr Mann’s second daughter.