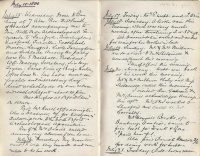 Mr John Spraggett, of Burdrop, called to ask whether the Heath Farm would be vacant at Michaelmas next, as he knew of a likely tenant. I replied that it was already let.

One of Betty Wilks’ children, about 4 years of age, got into the pond this afternoon. Barber Haynes told me of it as a piece of news worth listening to, though according to his own account he stood in the road and looked on without making any effort to save the child, “He was afraid of his feet,” he said – doubtless the child would have been drowned had not the mother rushed down from her cottage – 100 yards off – and plunged in after the child and brought it out. Fortunately the pond had been cleaned of the 2 feet of mud there was in the middle and the holes had been filled with stones owing to my application to the Rural Sanitary Authority otherwise it is pretty certain the child would have been suffocated in it.