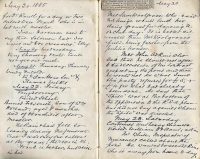 Cutting from Banbury Advertiser, 21 May 1885

The Chairman reported that during the first week 27 vagrants were relieved against 35 last year, and in the second week 35 against 48.

The Clerk read a letter from the local government board declining to sanction the payment of £18 out of the rates to send a widow and five children to her relatives in America.

A letter was also read from the Local Government Board sanctioning the appointment of Mr. I. Griffin as medical officer for the Cropredy district.

A letter was read from the Western Temperance League pointing out that from the returns issued it appeared that the cost of stimulants for 206 paupers exceeded the cost for 9176 paupers in other parts of the country, and that in some unions there had been no stimulants used for several years, which had improved the discipline in the house and the health of the inmates.

The Clerk said stimulants were only given upon the recommendation of the Medical Officer, and that the officers received £1 each per quarter in lieu of stimulants.

Mr. Gibbs said he should like to have the matter tested.

The Chairman said it was open for Gibbs to give notice of a motion that the board should give no stimulants.

Mr. Walford said he should like to know whether the statement contained in the letter was false or not.

The matter then dropped.

Mr. Ommanney pointed out that there had been a saving on the estimates for the half year not including the County rate of £260.

VOTE OF THANKS TO THE LATE CHAIRMAN.

On the proposition of Mr. R. Faulkner, seconded by Mr. Warner, a vote of thanks, was passed to Mr. R. A. Cartwright, the late chairman of the Board, for his services during the time he was in office.

Messrs. F. Mann, R. H. Lamb, A. J. Lamb, and F. Inns, waited upon the Sanitary Authority as a deputation from the parish of Sibford, to ask the board to rescind the resolution passed in reference to the pond at Sibford, and to adopt a suggestion of a more modified and less expensive character.

The Clerk read the minute, which showed that the contractor undertook to do the work for £16.

Mr. Pettipher said the parish were willing to have the pond cleaned out, but did not like the plan of having it bricked in and made smaller. At a parish meeting it was decided by nineteen votes to two that a deputation should attend and lay before the authority a plan which they had agreed to.

The Chairman said it was in consequence of hearing from Mr. Stevens that a parish vestry had been held which approved of this scheme, that the Sanitary Authority ordered it to be carried out.

Mr. Warner : That was so. I can corroborate what the chairman states.

Mr. Pettipher: they agreed to have it cleaned out, but the brickwork is another matter.

Mr. Mann then explained what had been done in the parish in reference to this matter, from which it appeared that the wish of the parishioners was the pool should be cleaned out and made watertight.

The Chairman : What state is the work in?

Mr. White said it was partly cleaned out.

The Chairman : And the work is now stopped.

Mr. Inns said the contractor was willing to take £4 for what he had done and £5 to finish it.

The Chairman said they only wished to carry out the wishes of the parishes. There had been some mistake about the matter. They had been led to believe the plan authorised by the Authority was approved by the parish. As the altered plan had been approved by the parish by nineteen votes against two, he did not see why they should not rescind their previous resolution and adopt the suggestion before them.

After some further discussion it was agreed that the sanitary officer should see the contractor and ascertain if he was willing to rescind the present contract and complete the work to the satisfaction of the officer for the sum of £9, including the £4 already expended.