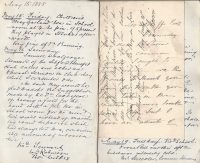 Samuel Woolgrove, Steward of the Sibford Benefit Club called and asked me to preach sermon on Club day which I consented to do.

He said they would be glad to adopt the suggestion made by the doctor last year of having a field for the band with a free tea in the School-room for the men and their wives instead of marching round the parish which had always led to a considerable amount of intoxication.

Horsman’s wife told me her boy Harry had been suffering from “Congestion of the lungs.”

The note transcribed below from Mr Norris, pasted into the diary at this point, presumably refers to the “Swalcliffe boy” mentioned on 27th March. The note was probably written on 20th May.

The boy is later revealed as Harry Lines.

In common civility I ought to have written ere this if only to thank you for the trouble you have taken in the matter of our troublesome Boy ; but I have an attack of Lumbago which is not inducive to sitting up right.

I had a long talk with the mother on Saturday but I do not think I made much impression on her. She advanced all sorts of objections to his going to Sibford – but the only one with any sense in it was – that between the hours of 12 and two when he would be out of school he was sure to get into mischief. Her real objection I feel sure is this – that Hall employed the Boy in the morning before school and in the evening after school paying him 2s. per week. If he went to Sibford a good deal of that time would be occupied in having to go the further distance. All I could do was to tell her she had better take advantage of your kind offer or she would get summonsed for not sending the Boy to school, as we were determined not have this school upset by one Boy – and she quite allowed this. The mischief has been in the two shillings a week Hall gave him. The Boy wants to get out to work, and the benefit the parents got naturally caused them to prefer that to his schooling. What is to be done I hardly see. It is a very difficult case, but as I told the parents they have brought it all on themselves by in earlier times encouraging the Boy in his rebellious conduct.