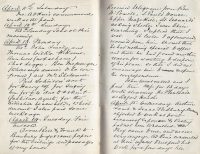 Arthur Lamb and Isaac Padbury, overseer, objected to work at pond because of expense and Vestry had not been consulted. They came to me, and were very angry. Adkins consented at their request to suspend his work for a few days till a Vestry could be held to consider the matter.

Visited Mr Woolgrove. Mr R. Lamb came in  whilst I was there – I told him about the pond – he had not heard anything about it. Mr Woolgrove thought the Rural Sanitary Authority would carry out the work and that the Vestry had nothing whatever to do with it.

There was a fall of snow at night.