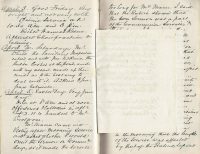 Easter Day. very fine day. Holy Communion at 8 am and at noon. Offertories and Collection in afternoon £2.11.4 handed to Mr Woolgrove.

Mr Mann came into Vestry after morning service and asked whether I would omit the Sermon on Communion days, as it made the service too long for Mrs Mann. I said that the Rubric showed that the sermon was a part of the Communion service, and that were I to omit it the Bishop would probably call me to order, and that I was usually somewhat shorter on such days. I suggested that Mrs Mann might come, as Mrs Stevens sometimes does, after the sermon or even just before it.

Mr Woolgrove came into the Vestry after afternoon service. he said that my sermons were never unduly long, and that if they sometimes ran to five or ten minutes over the time it was not sufficient to warrant one in making any alteration. I reminded him, as well as Mr Mann in the morning that the length of the Service was affected by that of the Psalms, Lessons, extra Collects and hymns more than by the sermon, which I always endeavoured to compress within 15 or 20 minutes, and that one service could not, in my opinion, ever be called unduly long. Mr Woolgrove quite agreed with me. I believe some of the clergy in the neighbourhood do omit the sermon on Communion days, but that they are not justified in so doing.

To-morrow, being Easter Day, There will be an early celebration of Holy Communion at 8 o’clock in the morning and a second celebration after Morning Prayer.

Collections will be made, as usual, for Church Expenses.

“And note that every Parishioner shall Communicate three times in the year at the least, of which Easter to be one.” P. Bk.

“But let a man examine himself, and so let him eat of That Bread and drink of That Cup” St. Paul.