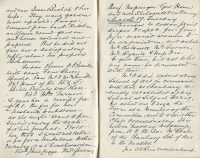 Provided 4 cotton print dresses and caps etc for four poor married women to be confirmed in, and asked Mrs Shelswell, Mrs Turner, Mrs Rymill and Miss Dix to give them but not to let my name be connected with them.

Mr Oddie called about School of Art in connexion with that at Banbury recently established at his School at Sibford Ferris. He asked me to sign the Form as a Member of the Committee, and to visit the Class occasionally. It is held on Tuesday mornings, from 11 to 12.30. Mr Beale of the Banbury School of Art is the master.

John Adkins called about Mr George Turner’s grave-stone which is ready. I told him Mrs Turner had paid me the fee.