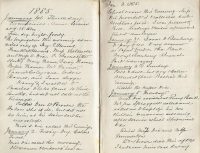 Mr John Spraggett called and asked me to baptize his two children tomorrow morning after service which I promised o do.

William Brown died this afternoon. I had seen him once during his illness and prayed for him by his bedside – he was conscious. He had never attended Divine Service in Church during all the years I have been here – and was much given to drink. He had a Widow Tennant living with him as “housekeeper?” – and she was there when he died. His sister was also there. He left no will but expressed a wish that his property should be equally divided between the two women.

Mr Elley came and went through the School Registers with me and helped me in filling up Form IX for the Inspector.