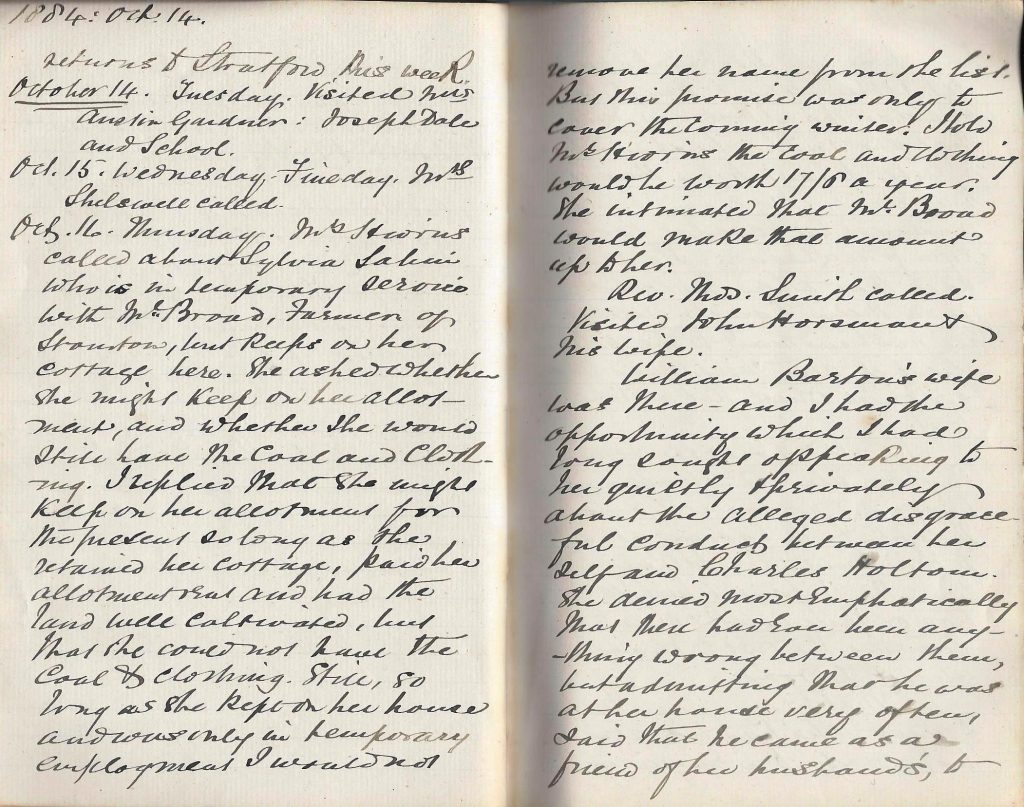 Mrs Hiorns called about Sylvia Sabin who is in temporary service with Mr Broad, Farmer of Stourton, but keeps on her cottage here. She asked whether she might keep on her allotment, and whether she would still have the Coal and Clothing. I replied that she might keep on her allotment for the present so long as she retained her cottage, paid her allotment rent and had the land well cultivated, but that she could not have the coal and clothing. Still, so long as she kept on her house and was only in temporary employment I would not remove her name from the list. But this promise was only to cover the coming winter. I told Mrs Hiorns the coal and clothing would be worth 17/6 a year. She intimated that Mr Broad would make the amount up to her.

Visited John Horsman and his wife. William Barton’s wife was there – and I had the opportunity which I had long sought of speaking to her quietly and privately about the alleged disgraceful conduct between herself and Charles Holtom. She denied most emphatically that there had ever been anything wrong between them, but admitting that he was at her house very often, said that he came as a friend of her husband’s, to hear him read the newspaper etc, the latter having been a much better scholar than Holtom, and that she and her husband had a right to have him there if they pleased without being annoyed by scandal loving and lying neighbours. She also said that when the lads gave them “Rough Music ” her husband went to the police about it, and threatened proceedings which put a stop to it.

Visited William Poulton and George Payne, also William Holland, but found no one at house – the wife and he having gone to Banbury Fair taking with them the infant which is only two or three weeks old and leaving the rest to play about the road.

Met Benjamin Messenger who had his arm bound up. On enquiry he told me he had his collarbone broken –

“Why that son Ben, o’ mine Sir, he were going on awful at his mother, and I told him to leave off or someone ‘ud make him, an’ then he turns on me an’ knocks me down and does the damage.”

“Was he the worse for drink?”

“Yes, that he was, Sir, he was just like a madman. I can’t think who he takes after.”

“I am afraid, Ben, you have not set your sons a very good example.”

“I am very sorry to hear all this, Ben, I wish you and your sons would turn over a new leaf, all of you. You will have to give an account of all your misdeeds at the last day, unless you repent and ask God pardon for them.”

I afterwards saw old Ben’s wife, and spoke seriously to her. She said young Ben was like a raving madman when in drink, and threatened to murder them all – but he had been somewhat better since his assault on his father.

“I fear he will get into serious trouble some day, if he goes on like this.”

“Yes, Sir and the sooner the better, for us don’t know what to do wi’ him.”

“I will take the first opportunity I can, to speak to him as well as your other sons, but I am sorry to say I never see them except when they are the worse for drink, and then it would be useless to talk to them.”