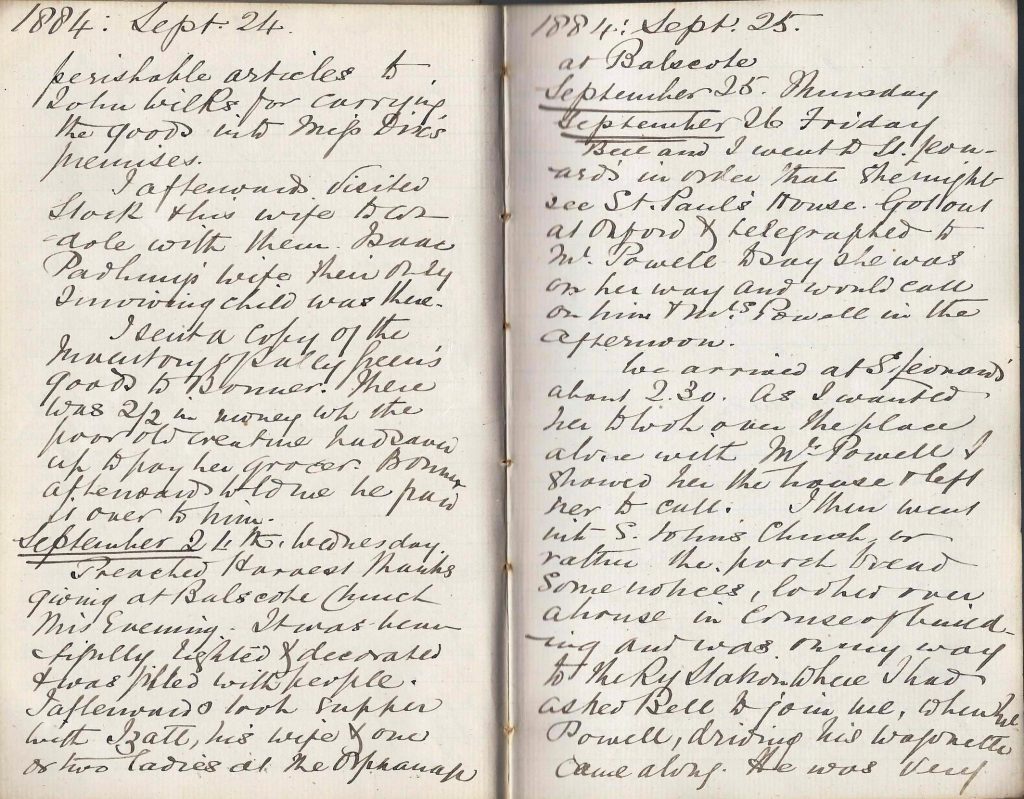 Bell and I went to St Leonards in order that she might see St Paul’s House. Got out at Oxford and telegraphed to Mr Powell to say she was on her way and would call on him and Mrs Powell in the afternoon.

We arrived at St Leonards about 2.30. As I wanted her to look over the place alone with Mrs Powell I showed her the house and left her to call. I then went into St John’s Church or rather the porch to read some notices, looked over a house in course of building and was on my way to the Railway Station where I had asked Bell to join me, when Mr Powell, driving his wagonette came along. He was very much surprised to see me, he said, and wanted me to go on to his house and have some tea – but I declined. He asked me why I did not let him know I was coming; I replied that I scarcely knew I was coming myself – for I should not have come if I could have got any other suitable travelling companion for Mrs Stevens – and that I wanted her to form her own opinion about the house without me – when, after he had gone on, Bell joined me – she had tears in her eyes and had evidently been “upset” completely. She told me Mr Powell had spoken very rudely and almost abusively to her – 1st because she had postponed her visit from the day first appointed viz yesterday; 2nd that she had written in the third person to Mrs Powell, 3rd that I had not specified at what hour she would call this afternoon.

Seeing that Mr Powell knows of Rosa’s condition, of the distance of Banbury from St Leonards and of the distance I have to drive to get from Sibford and that Bell told him she had started from home at 7 in the morning, his conduct was extremely ungentlemanly, to say the least of it.

On my return home I wrote to him to the effect that I could do better than take his school on the terms named; but did not think it worth while to get up an angry correspondence.

We put up at the Royal? Hotel opposite the Warrior Square Railway Station.