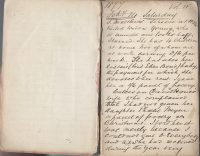 Saint Matthias Service at 10am. Visited Widow Young who is unwell and looks half starved. She has 4 children at home two of whom are at work earning 8/6 per week. She has also her sister’s (Widow ?Ellen? Bond) baby, the payment for which she devotes to her rent. I gave her a 2/6 parcel of grocery.

Called on David Hone’s wife who complained that I had not given her daughter Phoebe Payne a parcel of grocery at Christmas. I told her it was merely because I could not give to everybody and she had received during the year very considerable charity – gifts amounting to some 45/- and that the Christmas gifts of grocery from the Loggin Charity were better bestowed on the aged and sick and on those who did not receive the larger charity.

Went over Heath allotments and to Farm about repairs. Hands not at home.

Mr Woolgrove called this evening and said that he and Mr Hitchcox proposed to collect the church subscriptions before Easter this year in order to present paid accounts at the Vestry Meeting.