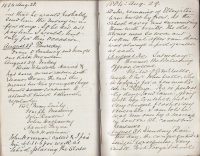 Visited old Mr Wells, uncle to Mr John Wells, who is lodging for a few weeks at Mrs Elley’s. He is perfectly deaf, and lame, going with two crutches, but is very cheerful and looks very venerable. I am told he was run over by a carriage in London which caused his lameness.