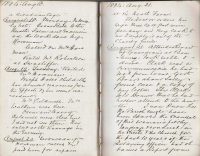 Attended Board of Guardians at Banbury. Took Webb to drive. Clerk read a communication he had received from Local Government Board about Sally Green’s case and a copy of my letter. The Clerk told Bonner that he had better attend to the matter. I now know that the Parish might have been spared the scandal of this woman’s filthy language and conduct in the streets and the church for the past 10 years if the Relieving Officer had obtained a Report from the Doctor and taken her before the nearest magistrate.

The Local Board wrote to me a day or two ago in reply to my letter saying they had no power to order the Lunatic’s removal – but that they would communicate with the Guardians.

Last time I brought the matter forward the Guardians (chiefly Cartwright the Chairman, Ommanney, Vice Chairman, and  Ayton Vicar of Chalcombe) said they could do nothing. Now it appears that if they can do nothing, Bonner was only waiting for a nod from them to do his duty.

On my way back from Banbury I called on Mr Henry Norris our nearest magistrate about the matter. He seemed to have an idea that however bad a lunatic’s conduct might be, he had no power to sign a warrant for her removal to the Asylum unless the lunatic was dangerous. He referred to Mrs Weldon’s case when I reminded him that he had signed a warrant for this lunatic once or twice before – and said that so much fuss was made about such things now-a-days. I reminded him that he could have no motive in sending Sally Green to Littlemore but that of doing what was necessary for the peace of the parish etc and that if he had made up his mind he could not sign the order I would let Bonner know, so that he need not have the trouble of bringing her to him. But he said he had not made up his mind and would be glad to see Bonner on Saturday. I promised to ask Bonner to call on him.

Austin Gardner came to me in Banbury this morning and spoke to me about Harry’s hiring a horse and trap of him yesterday to drive himself and others to Mr Jenkins’s at Upton House to play a lawn tennis match – that they left Jenkins’s at 8 pm and then drove to Tysoe where they left the horse outside for over 2 hours and did not reach Sibford till nearly 1 o’clock in the morning – and Harry had not paid him though he promised to do so at 5 o’clock today. I told Gardner that I asked him some time ago – when I paid a debt of Harry’s – not to let him get into his debt again – that I was much perplexed what to do with Harry, that I could not pay his debts. He said he would take care not to let him have a horse of his again.

When I came home and told Bell, she spoke to Harry about the matter when he was so rude to her that I had to interfere – and then there was more of his ill conduct. He made no apology for being out till past 1 this morning and keeping me and my servant up.