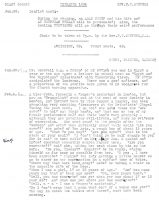 A Miss Cobb, formerly a draper’s assistant in London, but now an “Evangelist” sent out at the cost of some society in London, and invited here by Miss Capper a Quaker has been preaching very exciting discourses at the Methodists’ Chapel during the past week. I am told she asks those who “are saved” to hold out their hands, and one or two of my female parishioners held out their hands very promptly – although they are notorious evil-livers, and show no evidence of conversion. She went round to the people after the “sermon” and asked them privately about their souls “Are you saved?” she asked of Tom Aris, a rough boy of about 16 years of age. “What do you say?” “Are you saved? What is the state of your soul?”  “I don’t think ye be half sharp be yer”.

She is said to have called on Mr. Ainge Sen. a quaint and indeed somewhat eccentric church Farmer here. “Are you converted?” said she, taking her seat close by him on the sofa. “Be you, Missus?” enquired he in reply, edging himself as far away as possible from her. “Oh, yes, I have been converted” replied the lady getting a little nearer so as to carry on her conversation in a subdued tone of voice.

“Where may that have been, pray?” asked he taking a chair on the opposite side of the room.

“And how many years may that a’ been ago now?”

“Well, you was converted was yer when yer was about 17 or 18 year old? And what was yer afore yer was converted?”

“No I don’t mean that I mean what sort of a woman was yer?”

The way in which the tables were turned must have been amusing.