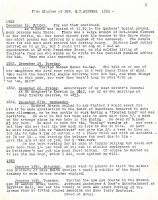 Mr. Routh was buried at 11.30 in the Quakers’ burial ground. Many persons were there. There was a large wreath of hot-house flowers on the Coffin, which was borne direct from the hearse to the Grave where one short prayer was offered by a nephew of the deceased. The people then for the most part entered the Meeting house. Richard Lamb junior invited me to go in but I could not do so as I had an appointment at 12 with Pensioner Green, an old soldier living at Traitor’s Ford and who wants me to write to the District Pension Office for him. Vere was also expecting me.