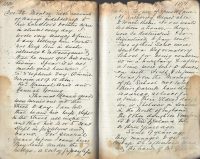 Fresh accounts of Harry’s indebtedness to his landlord and others come in almost every day. I wrote very severely to him today telling him I could not keep him in such idleness and extravagance and that he must get his own living. I fear it is not much good however.

Thomas Hones’s goods were turned out into the street today. I am told that he and his wife slept in the street all night, and that his 4  or 5 sons slept in pig sties and barns. For several years before I came here they lived under the hedge, a sort of gypsy life at the corner of Epwell Lane. No authority seemed able to touch them. No one would let them a house, – they were so destructive and so disinclined to pay rent. Two of their sons were sent to a Reformatory School for being concerned in a burglary and after a time were sent to America with strict injunctions from the Managers of the School not to let their parents have their address, at least for a time. Their eldest daughter is I believe in service in the North of England. The other daughter emigrated to New Zealand two or three years ago.

Some 9 years ago they managed to get a cottage which afterwards came into the hands of Mr. G. Turner who put it in good order and indeed, considerably improved it. But they always had an unwillingness to pay their rent. One morning the boys set the thatch on fire and a huge hole was burnt in the roof. Still they resided there for some time until at last Mr. Turner got them out and they went to live  at Hook Norton. The Curate there told me that they were very troublesome people – always begging etc.

About a year ago they returned to Sibford and Thomas Stock let them a wretched cottage for 15 pence a week. This they paid regularly for some time. But as they had got into his debt to the amount of a pound or more, he said he would forgive them that if they would go out, for he could not afford to let them live in the cottage for nothing whilst he had to pay “levies” on it.