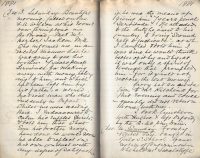 Beautiful morning. Called on Rev F. A. Wilson at his rooms over Shrimpton’s in the Broad. Met Mr Herbert Jackson MA who informed me in an excited manner that he was going to get his brother 7 years penal servitude for making away with money belonging to him and which had been left him by his father, a retired medical man who died suddenly in Oxford. Whilst we were residing there I endeavoured to calm his ruffled spirits, and told him that whatever his brother may have done he would never be able to reflect on his own conduct with any degree of satisfaction if he were the means of giving him “7 years penal servitude.” He alluded to the duty he owed to his country to bring “scoundrels to justice” etc – at which I laughed and told him I was sure he would think better of it by and by, as it was only a spirit of revenge that prompted him – for it would not restore the lost money.

Harry had an invitation to Mr Kitchen’s for this evening and consequently did not return home with me.

I took luncheon with Hughes and left Oxford by the 2.40 pm train.