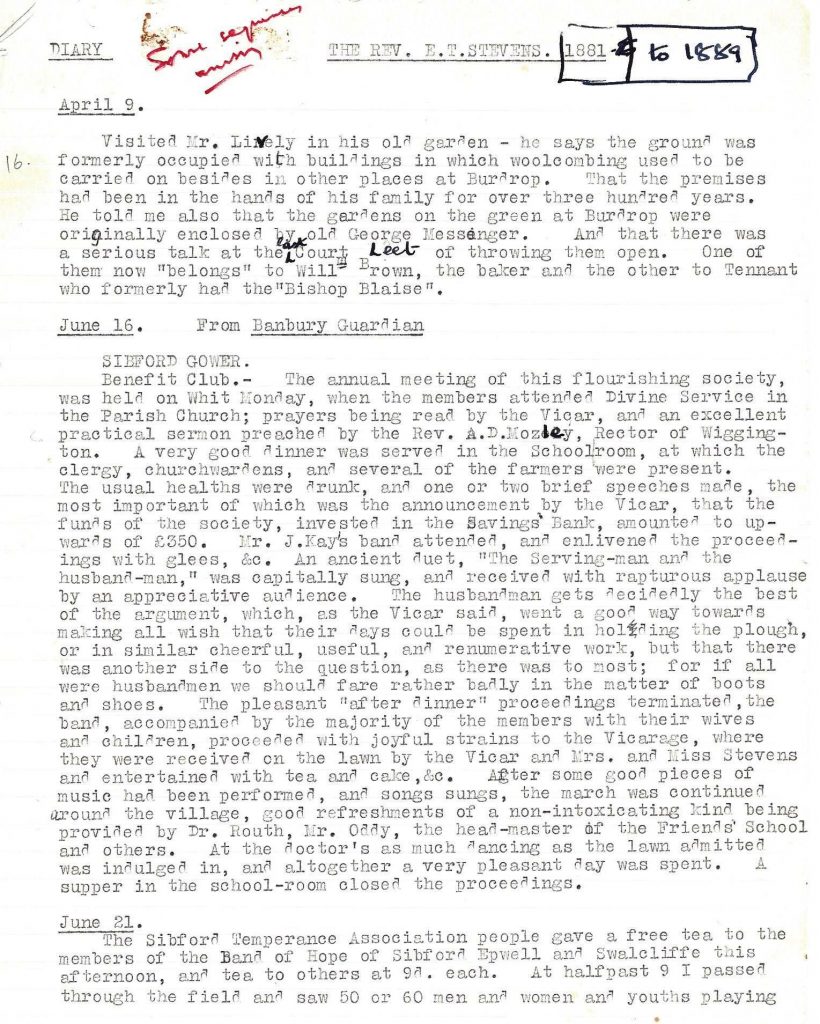 Benefit  Club:—The Annual Meeting of this flourishing society was held on Whit Monday, when the members attended Divine Service in the Parish Church; prayers being read by the Vicar, and an excellent practical sermon preached by the Rev. A. D.  Mozley, Rector of Wiggington. A very good dinner was served in the Schoolroom, at which the clergy, churchwardens and several of the farmers were present. The usual healths were drunk, and one or two brief speeches made, the most important of which was the announcement by the Vicar, that the funds of the society, invested in the Savings’ Bank, amounted to upwards of £350. Mr. J. Kay’s band attended, and enlivened the proceedings with glees, etc.  An ancient duet, The Serving-man and the husband-man , was capitally sung, and received with rapturous applause by an appreciative audience. The husbandman gets decidedly the best of the argument, which, as the Vicar said, went a good way towards making all wish that their days could be spent in holding the plough, or in other similar cheerful, useful and remunerative work, but that there was another side to the question, as there was to most; for if all were husbandmen we should fare rather badly in the matter of boots and shoes. The pleasant “after dinner” proceedings terminated, the band, accompanied by the majority of the members with their wives and children, proceeded with joyful strains to the Vicarage, where they were received on the lawn by the Vicar and Mrs. and Miss Stevens and entertained with tea and cake, etc. After some good pieces of music had been performed, and songs sung, the march was continued around the village, good refreshments of a non-intoxicating kind being provided by Dr. Routh, Mr. Oddy, the head-master of the Friends’ School and others. At the doctor’s as much dancing as the lawn admitted was indulged in, and altogether a very pleasant day was spent. A supper in the school-room closed the proceedings.