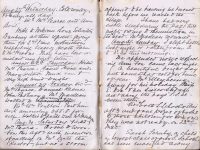 Visited Mrs Pearce. Drove to Wroxton this afternoon with intention of calling on Mr Izatt the Rector, but as a storm appeared to be brewing we turned back before we reached the village.

I have had very little sleep during the past two days owing to rheumatism in the head.