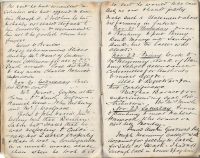 Spoke to John Harris Junior telling him that Reuben Sabin had stated that he was neglecting to cultivate his 2 acres properly and that it was in consequence in a much worse state than when he took to it. He said he would take care that no one should justly make such a statement about his farming in future.