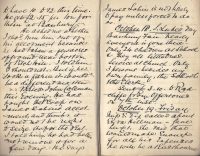 Miss E Dix called about Ezra Hillman – gave her £1. She said that would make enough for all his expenses. He will be at Eastbourne 3 weeks free and then, if they will keep him, 3 weeks more at 10/- per week. His travelling expenses and washing have to be provided for.

His mother called on me this afternoon. I told her my servant should drive him to Banbury station by 8.29 tomorrow morning, but it would be much safer for Ezra if she could get Mr Richard Lamb to lend his covered sociable for the purpose. Mr Lamb promised to lend it and someone to drive.

Widow Young called and asked for a pair of boots for her eldest son who is going into service at Hampton Lucy near Wellesbourne. William Spicer is going to the same place.