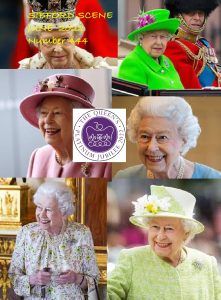 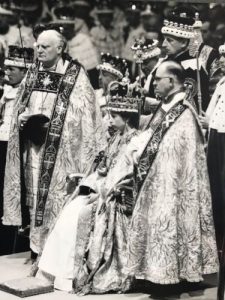 As Her Majesty Queen Elizabeth II celebrates her Platinum Jubilee commemorating her accession to the throne on the death of her father King George VI on 6 February 1952, I wondered how the Sibford villagers celebrated her Coronation on 2 June 1953. I asked some of our more senior residents for their memories of that special day and was initially surprised as to how few memories could be brought to mind.

Perhaps I shouldn’t have been surprised – at that time only a very few people in Sibford had a television set so apart from the radio and newspapers, which enabled adults to keep up to date with national affairs, children and young people would have been perfectly happy to enjoy their holiday from school or work to enjoy their own pursuits.

Leslie Baily, our local historian, was living in Gowers Close at the time, invited his neighbours and their children to watch the ceremony on his newly installed television set. Robin Spicer remembers crossing the road from his home in Acre Ditch in the morning to watch the events on the tiny screen. In the afternoon there was a Fancy Dress Parade at the village school. In 1952 sweets had recently come ‘Off Ration’ and he clearly remembers that Freda Payne and her mum sewed sweet wrappers all over their dresses to celebrate their joy of being able to enjoy sweeties once again!

Children’s Sports were held in Poulton’s Field (now the field behind the village hall which was not built until 1957) and Robin remembers being presented with a pencil with a crown on top for winning the egg and spoon race. He also received a Coronation Crown coin and went to a tea party for the village children in the school. Adults had their own social in the evening.

Two villagers who were slightly older than Robin remember spending the day out and about in the village fields. They climbed up into a tree in Lower Way Field, (behind Temple Close) and carved their initials – where they remain until today! How will you remember the village’s Pla8num Jubilee? Come and join in our community’s celebrations, there is something for everyone.